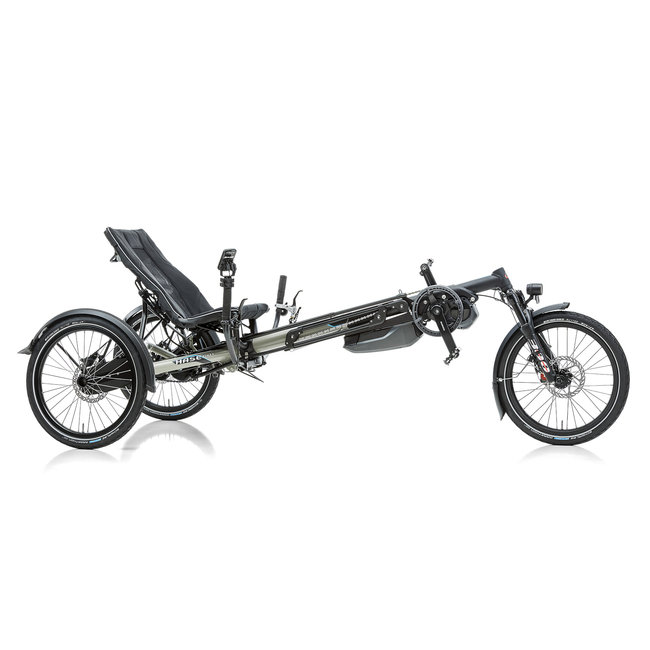 E-trike for the discerning cyclistThe EVO STEPS is the luxury model of our KETTWIESEL series. Some may argue that the name “KETTWIESEL” is too whimsical for this classy set of wheels, but what’s named is named. Moreover, it’s long since become the epitome of a sporty, high-end trike.

The EVO STEPS is our upgraded version for riders with even higher standards for comfort: The standard model features a Shimano Steps motor and the corresponding Di2 electronic shifting system. And its suspension is out of this world: independent wheel suspension, air shocks, and cornering-stability control like a car. A sporty ride doesn’t have to be uncomfortable.

E-motor from Shimano: power on demandIt’s the rider who decides when the Shimano Steps switches on. Then the powerful mid-motor provides smooth and seamless assist. It gives you more traction on the rear wheels than a front motor, and its 504Wh battery, hidden behind the seat, can be fully charged in a mere four hours.

The Di2 Alfine is an 8-speed, electronic, internally geared hub that coordinates perfectly with the motor. It can be operated in either manual or automatic mode. And the rider can switch between these modes with the touch of a button on the display.

The art of unfoldingWhen parked upright, the EVO looks like a futuristic work of art. Just as impressive is the folded version: all it takes is three quick steps to transform the trike into a masterpiece of compactness with a maximum length of 38 inches (96 cm).

Also foldable … and eye-catching: the KLIMAX Foldable Fairing, which is available as an accessory. The patented HASE BIKES fairing waits – compactly folded – in its carrying case for the next rainy day, when it can be mounted and unfolded in a flash. With the corresponding Rain Poncho, it turns the EVO into a weatherproof, all-season trike.

Recumbent trike + recumbent trike = 5-wheel tandemThe delta configuration – one wheel in front and two in the back – offers an exceptionally sporty performance: not only because the turning radius is very small, but also because the low center of gravity guarantees excellent safety and stability – even when cornering at high speeds.

The ride is twice as sporty – and will attract twice as many curious stares – when you connect two trikes with the HASE BIKES Tandem Coupling.

Add your review
Open Mon-Fri 10-6; Sat 11-6
Worker-owned since 1997
Summer Clothes 20% Off! Use SUMMERCLOTHES21 to apply at checkout.
Support your local co-ops!