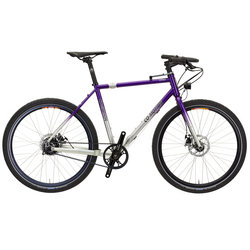 Co-Motion Pangea - Rohloff S&S Dynamo
$10,180.00
There’s no place on Earth the Pangea won’t go. Take it to Timbuktu or Texas, with or without all your touring gear, and let it show you what it can do. The Pangea is the original global touring bike with its standard 26” wheel format, you are sure to find tubes and tires even in the most remote countries. - Optimized for 26" wheels and 2.0" tires - Rugged and tough Reynolds 725 steel tubing with integrated chainstay yoke - Steel unicrown touring fork - Proven Co-Motion touring geometry - Rack and Fender mounts plus three bottle mounts - Mechanical disc brakes and hand-built wheels - Choose from 2x10 speed, Rohloff or Pinion (in store option has Rohloff) Framesets starting at $2,554 Complete bike starting at $4,504 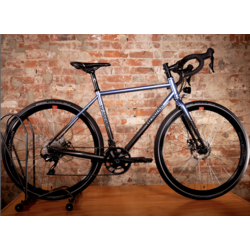 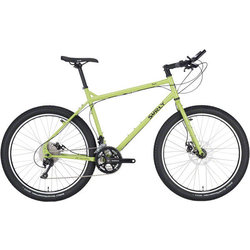 Surly Troll
$2,349.00
Off-road touring can be a zesty enterprise, but it’s not without its perils. Bicycles are simple machines that are extremely efficient, but all simple machines carry along with them the chance of breaking down. This efficiency can get you in trouble if your bike decides to break down far away from the comforts of your parent’s basement. If you’re going to ride your bicycles where no one can see, you better take gear that’s up to the task. Troll is up to the task. Surly's Troll was once a simple mountain bike frame with a few extras that made it nice for touring. The Troll has evolved into a frame that has been pushed deeper into the category of off-road touring. Its geometry is no longer suspension corrected, which gives it more room for a larger frame bag. The Troll is a bike that has one purpose – and that purpose is to carry you as far away from society as possible. 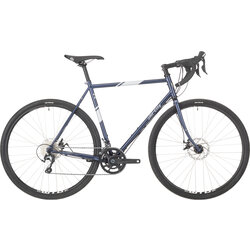 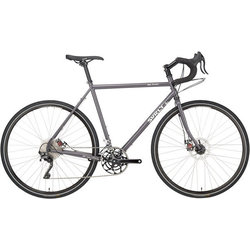 Surly Disc Trucker
$2,099.00
Surly's Long Haul Trucker enjoys a reputation as one of the best riding and most value-packed touring bikes out there. It's been around long enough to be tested in the real world, in all kinds of places, with all kinds of loads on all kinds of roads. Sometimes, however, a combination of load, climate and terrain demands a bit more braking performance than a standard rim-brake LHT can provide. That's where the Disc Trucker comes in. Disc Trucker is a Long Haul Trucker specifically designed for the unique forces discs impose. Surly made sure it can run discs, racks, and fenders with no jury rigging, a somewhat unique feature they've just now decided to call Simulpatibility. Most of the components on the complete bike are the same as the standard LHT; parts chosen for their balance of technical capability, durability, and value. The drivetrain uses the sort of wide gearing you will need for loaded and unloaded travel, cable operated disc brakes for their proven reliability and ease of service, and hubs that are durable and easy to maintain. You'll need to outfit it with the extras you want, like fenders and racks. Surly doesn't include that stuff because everybody's needs are different. From the casual commuter to the person who rides around the world more than once, the Disc Trucker is more than capable. It's a tool designed from the ground up to take you and a bunch of stuff just about anywhere you'd like to go. It is a tool to help you get lost and find yourself. 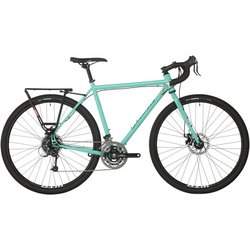 Salsa Marrakesh Deore
$2,049.00
Marrakesh is Salsa's world-touring bike, designed for fully loaded, rugged exploration. It’s stable and predictable when heavily loaded, and durable enough to take on everything from the Turkish dust to mud from Thailand’s monsoon season. The lion’s share of that durability owes to the Cobra Kai steel frame that shrugs off choppy roads, heavy loads, and the foreseeable abuse any exploration bike will endure, all while remaining lightweight and lively. Its WTB rims and Maxxis tires love to roam where traditional touring bikes falter, and they’re spurred on by a 3x9 Deore drivetrain that allows you to fine-tune your cadence and speed, essential for loaded touring in hilly country. A pair of Hayes disc brakes keep control at your fingertips and instill confidence when terrain suggests otherwise, while Salsa’s handlebar, stem, and seatpost pair with a WTB saddle to keep your touch points comfortable in a variety of riding positions. Settle in and enjoy the adventure. 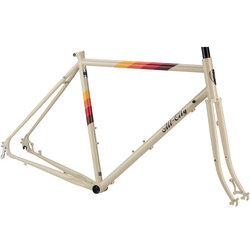 All-City Space Horse Frameset
$999.00
Even if you own a different bike for everything, it's still necessary to have one that can do it all. That bike is the Space Horse. It's become a cult favorite because of its classic styling and ability to handle just about any task or terrain. All-City's Space Horse Disc frameset allows you to build your perfect bike with the addition of all-weather control disc brakes. The geometry is a mix of traditional road and randonneur, with a relatively short rear end and a bottom bracket that’s slightly lower than a standard road bike. This gives it both agile handling for riding unbridled and increased stability when loaded. This blend of geometry and 612 Select tubing create a bike that is capable of quick road centuries, gravel racing, commuting, and of course loaded touring. The frame accommodates front and rear racks, fenders, and tires up to 42c in size for the 700c bikes and 45c for the 650B version. It also utilizes a dropout with a replaceable derailleur hanger. All of the classic All-City touches are present: signature brazed-on seat collar, pantographed bottom bracket shell, pump peg, reinforcements on the bottle bosses, and a beautiful lugged crown fork. The fork sports both a double eyelet on the dropout and mid-blade mounts to allow you to use pretty much whatever front rack you wish. 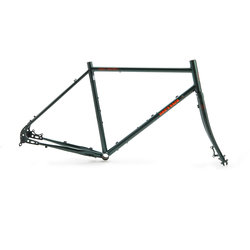 Bassi Hog's Back Frameset
$800.00
Steel all-road world touring frame, a modern Montreal design. The Hog's Back is Bassi's true all-road loaded touring frame. This bike has ridden all over, from Montréal's streets to Vermont's highways to Peru's dirt roads, as loaded-down with baggage as you please. It's made to keep you comfortable and relaxed while you enjoy your long days in the saddle. Smaller frames use smaller wheels, so the proportions stay right for your body. Larger sizes use different steel in certain sections, to keep the bike feeling solid and keep you in control, no matter the load on your racks. The geometry is made for even front-rear loads, or slightly front-biased. This is the road-touring model, but when we say road we include gravel and dirt, as well as paved roads and paths. Do what we do and ride it all over, push its limits, then come back and tell us all about it. For the curious, if you want to bring your Hog's Back to visit its namesake mountain, it lives in Gaspésie National Park. You can hike up it, but you'd best ask the park rangers before you ride up it, too. FEATURES - Columbus Cromor tubing (frame and fork) - Geometry optimized for balanced front-rear load, or front-biased load. - Ideally used with swept-back "alt-bars" rather than road drops. If using drops, you'll need a short stem, this bike has a long front to it. - 27.2mm steapost, 29.8 or 30.0mm seat clamp - EC34 headset (1-1/8" standard) - 28.6mm steerer - Disc brake ISO mounts, 160mm rotor recommended - Downtube mounts for shift levers or housing stops - 135mm rear spacing, quick-release vertical dropout - BSC threaded bottom bracket (1.37" x 24TPI) - Higher BB than many touring bikes - Includes cable guide for shift cables under the BB shell - Kickstand plate (please don't overload the kickstand, we stand by Soma's recommendations for touring bikes and kickstands) - Pretty darned rugged weight limits, as far as luggage on a properly installed rack goes. We tested with 26kg of weights in panniers, up and down steep hills, and handling didn't change much, so you're probably good. But be reasonable. - So many eyelets, I haven't even counted them. Put racks, cages, fenders, whatever you want on this bike. Keep putting 'em on. No, more than that. - Eyelets for a Bassi Strap, too. It's for helping you handle the bike when you've taken the luggage off. Don't try hauling it onto that train with the bike's weight and the luggage's weight all on the strap, please. You'll hurt the bike, the strap, and probably yourself. Photos by Jonathan Chhun (@jochhoo), studio shots by Riccardo Cellere (@riccardocellere)
Page 1 of 1